Alisoun Sings finds its starting-point in Chaucer’s iconic, proto-feminist Wife of Bath. Written in a lively mash-up of languages old and new, this fast-paced yet meandering book-length monologue in many voices returns from the 14th century  to advise again on the conditioning of women and men, marriage and the state of the world. This labyrinthine text navigates love and protest in landscapes impacted by global warming, systemic violence and solar eclipses. Bergvall continues her previous work creating texts that rest on transhistoric forms of English, beyond its dominance as a global lingua franca, and places her quest in the intersections and migrations of stories and languages.

It made me laugh out loud in some sections, nod wisely in others, want to chorus a ‘yes!’ here, and a ‘go-girl’ there. I love its generosity, and its collectivity, its command and range of tone and style, its stylishness, and its many voices. A woman from the fourteenth century and a poet from the twenty-first join forces to tell it how it is. Chaucer better watch out. – Clare Lees, Professor of Medieval Literature, University of London

Alisoun’s been to hell and back as an art and fashion loving, potty mouthed, unaccommodating desiring feminist queer mother-of-us-all disobedient and irrepressible and ever deep and vulnerable language breaker – Rachel Levitsky, publisher, activist, writer.

As a reader the work is transportive, I enter a new and unfamiliar space as I read this, it feels almost archaeological in nature. There are worm holes here, carved out through space and language, stories and places, centuries collapse, gaps in time dissipate, the medieval and the modern merge. – Rachel Lichtenstein, curator, author of Rodinsky’s Room, On Brick Lane

Ecofeminist writer and performer Caroline Bergvall follows her earlier brilliant Meddle English by dialoguing with, not quite melding into, Chaucer’s vernacular muse, the Wife of Bath. An inspired, tragi-hilarious mixing and meddling of modern and medieval Englishes, a rallying cry for bio- and-linguistic diversity, a ferocious unleashing of sexual and bodily power. – David Wallace, author of Chaucer: A Very Short Introduction, Oxford UP, 2019. 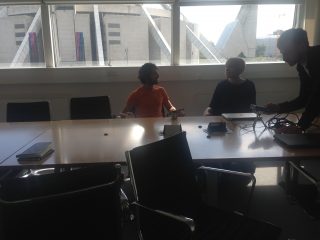 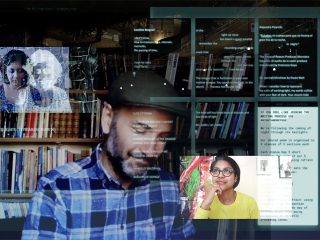