A cross-disciplinary performative discussion using Attar’s poem as a starting point for discussion and sonic perceptual transformation. Commissioned by and premiered at the Whitstable Biennale 2018.

Set up ambisonically with sound artist Dan Scott, Conference (after Attar) develops into a cycle of sounds and vocal frequencies, including migratory songbirds of which a nightingale captured on their return to Kent this spring. A bassline runs through the space, a heavily down-pitched vocal songline based on medieval tonalities initially composed for Ragadawn by British composer Gavin Bryars.

“From compere to shaman!”

The Conference of the Birds is a medieval mystical work by Persian poet Attar, composed of poetic sections, dialogues, conversations and parables in which allegorical birds are encouraged to set out on a spiritual quest. In keeping with this motif, our conversation explored ideas of journeying and asked how languages migrate and settle, how love poetry crosses histories, how traces create places, and the vast question of migratory and endangered species. Each speaker was asked to reflect on their own trajectory and how their practice and concerns might respond to the mystical initiatory journey set up by Attar.

Greetings! To each of you,
and of each of you more than you know,
and more of you than I know,
some of you in listening seats
some of you I rely on to speak,
and I will be your host.”

At first it seems Bergvall is not so much a performance artist as an academic who has brought together a panel of experts to discuss the medieval Persian poem The Conference of the Birds, composed by Attar of Nishapur in the 12th century. It turns out that poems, like birds, move freely around our planet.

Gavin Bryars, for use of songline 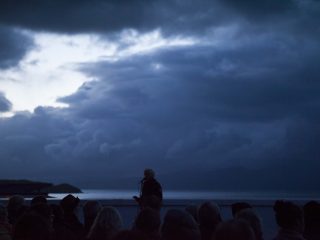 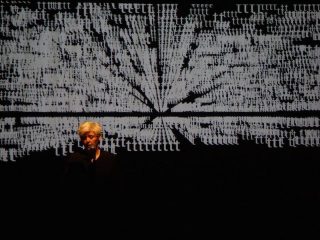